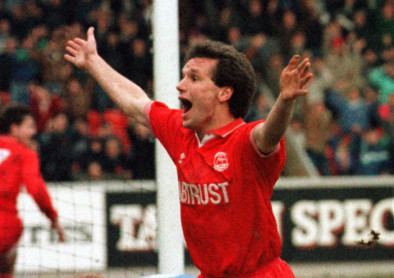 BobbyBiscuit looks at the mercurial Dutchman's time at Pittodrie.

Here's one for you… Aberdeen F.C. are interested in buying a striker. Fast wee guy, can turn defenders before they even know he's got the ball and then he's gone. Into the penalty area, keeper comes out… one nil!

Sound good? What if you were to be told he was a European Cup winner? In his prime? A certainty to go to the forthcoming World Cup as back up to the guy who was about to be named as the Greatest Striker of the Century.

Now it's just sounding TOO good, isn't it?

But, you know, it happened. For £650,000, a Dutchman by the name of Hans Gillhaus left behind Hans van Breukelen, Gerald Vanenburg and Soren Lerby at PSV Eindhoven, to team up with Theo Snelders, Jim Bett and Charlie Nicholas at Aberdeen.

The transfer came out the blue. The Dons had just won the League Cup, and the league campaign was going alright, a bit behind the blue meanies of Govan, but we could catch them, we knew that.

Alex Smith and Jocky Scott obviously thought we could do with a bit of extra help, and that's where Hans came in.

His debut would come at Dunfermline's East End Park, in the days when the Pars actually had a support.

It was a miserable day, but there was an eagerness amongst the Dons fans to see this new Dutchman, afterall his country had been known to produce one or two players of note.

If there's been a better debut by a Dons player, I certainly haven't witnessed it. By half time, we were two nil up. Or should I say Hans Gillhaus was two nil up. A header from six yards followed a sublime looping overhead bicycle kick, awesome stuff, but the thing that I really couldn't get over was his pace with the ball at his feet.

He made the Dunfermline defenders look stupidly static that day. By the end of the weekend the whole of Scottish Football was talking about him.

And by the Thursday? Well, by then he was merely beginning to etch his name into Dons folklore.

The night before, at a packed, vibrant Pittodrie (always seems better under floodlights!), the ball drops to him 25 yards from goal. In reality, it's a nothing chance, well, it's not a chance at all. Four defenders in front of him, he's angled his body slightly away from goal…Charlie Nicholas is screaming for the pass.

Perhaps for the first and last time, Charlie is lost for words, Gillhaus has dipped and swerved the ball into the top corner, way beyond the reach of Chris Woods. Pittodrie erupts, and Hans is the hero again. And it wont be the last time, either.

Almost instantly, the partnership between Nicholas and Gillhaus looks like dynamite. Nicholas's craft, skills and vision compliment the speed and the clinical vision of Gillhaus.

Fantastic performances in the Scottish Cup run, particularly against Hearts and Dundee United from the Dutchman secured the Dons place in the Cup Final, where we won on penalties and Celtic's Paul Elliot kicked lumps out of Gillhaus for the full 120 minutes.

The next season, with Nicholas defecting back to the East End of Glasgow, the onus on Gillhaus up front all of a sudden became a whole lot greater.

The second game of that season showed a classic example of the strengths in Hans's game.

A searching pass from the back sees Gillhaus spring the Celtic offside trap, there's no catching him, and from 18 yards out he blasts the ball under Pat Bonner's body and we're one nil up. And, as the season goes on, Gillhaus remains a catalyst for the Dons title push, in particular, scoring a last minute goal to beat the huns at Pittodrie and forging a frighteningly good partnership with young Eoin Jess.

His efforts are in vain though, and we lose out in the last game of the season.

The following season sees a change in management, and, after a season blighted by injury, Gillhaus leaves Aberdeen on a sour note. It was rumoured he didn't see eye to eye with Willie Miller, his new manager and once this became apparent, there was no way Hans was staying.

He was missed in his last season, and in truth, he's still missed. Duncan Shearer came in afterwards and was a more prolific goalscorer, but Gillhaus's all round game was exceptional.

We missed his pace, his ability to run with the ball at defenders, the amazing heading ability he had and we missed him because he entertained us, he was so exciting because his brain was just as quick as his feet.

He was deadly, and he is a Dons Legend, even in spite of what happened on the team bus at St Johnstone…allegedly.