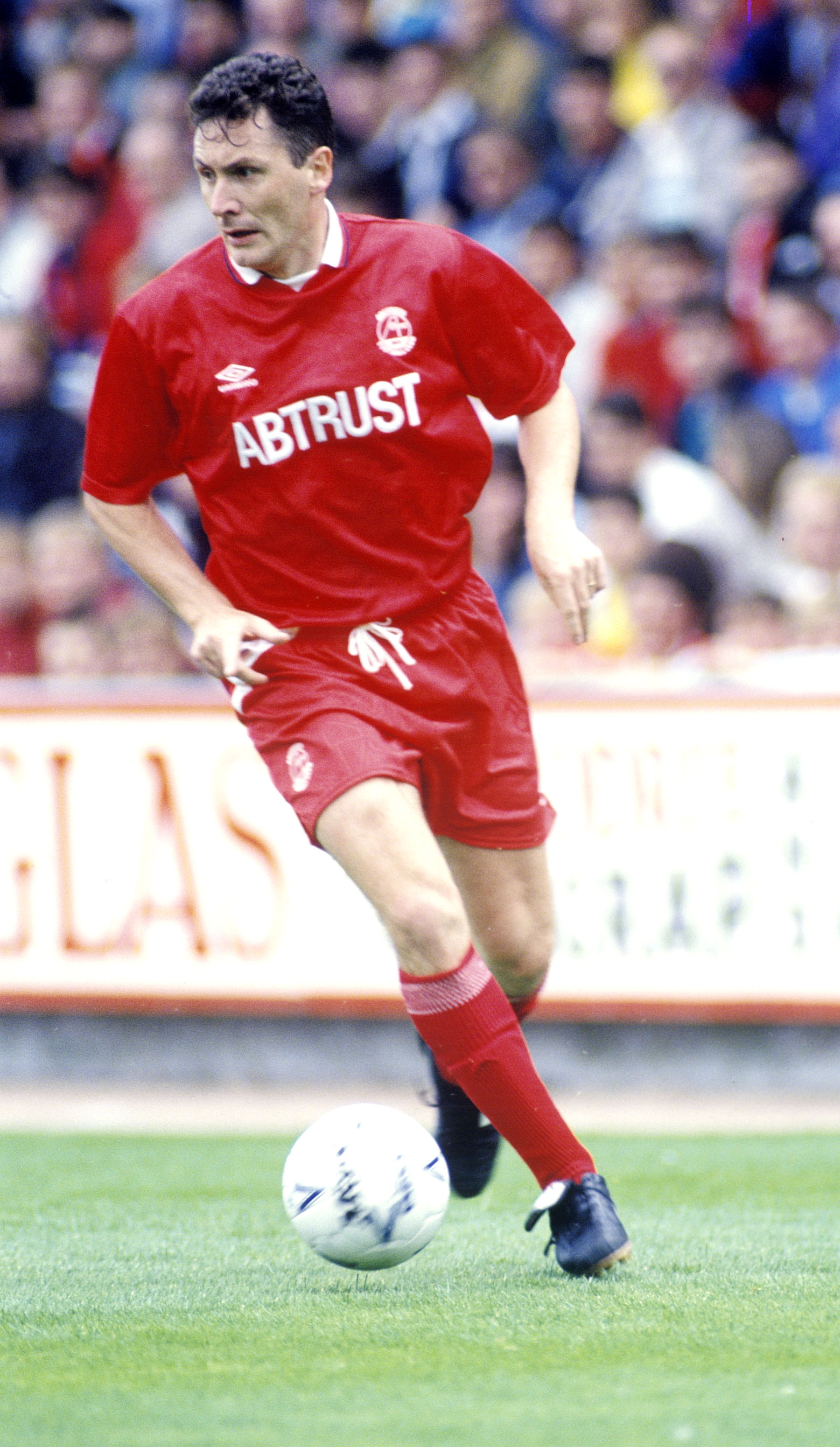 By the time Aberdeen manager Alex Ferguson took Jim Bett to Pittodrie in 1985, the cultured midfielder was already a well travelled footballer. Starting at Airdrie, through Iceland and Belgium, the Scottish internationalist signed for Rangers in 1980, before again heading abroad back to Belgium. It was from there Fergie signed Bett for £300,000 in time for the start of the 1985-6 season.

It didn’t take Bett long to make an impression. In the opening game of the season against Hibs, a short corner from Peter Weir found Bett on the edge of the box, and his drive from 20 yards found the roof of the net, the first goal in a comfortable 3-0 win to get Aberdeen’s defence of the title off and running.

Bett struck up an immediate partnership with Weir on the left of the Dons midfield, adding calmness and a class that could be argued was sometimes missing from Fergie’s teams of that time. His often lackadaisical approach to games irritated many fans, but there could be no doubt his quite considerable talent in the Aberdeen engine room.

Injury deprived Aberdeen of Bett for a fair chunk of his first season, he was missing when Aberdeen won the Skol League Cup at Hampden in October, but he was back in the side by the turn of the year to help Aberdeen on three fronts, the league, the Scottish Cup and to some the most important, the European Cup. Bett played in both legs of the quarter-final against IFK Gothenburg, and after a 2-2 draw at Pittodrie, could have won the game in Sweden with a late drive which only just went the wrong side of the post. The league was also to be beyond Bett and Aberdeen, a disappointing defence of the title finishing with Aberdeen in fourth place. It was to be third time lucky for Bett, as the Dons reached the Scottish Cup final, and ‘Jazzer’ starred as Aberdeen comfortably beat Hearts 3-0.

During the summer of 86, Bett was included in Scotland’s World Cup squad for the trip to Mexico, but it was to be a double disappointment for the midfield man as Scotland meekly exited the competition early, and Bett was the only outfield player not to appear on the pitch at any stage.

For the next few years, Bett was to be a regular in midfield for Aberdeen, rarely missing through injury, and arguably his finest year came in 1990/1991, when Aberdeen ran Rangers all the way to the last game of the season. Bett was at times majestic to watch, his box-to-box runs, pinpoint passing, and chipping in with a few goals as well. Three goals that stick out were two at Ibrox just before Xmas 1990, the Dons 2-0 down and looking beat, up pops Bett with a double in the last 10 minutes, and a superb late strike at Love Street later on the same season to keep the Dons in the hunt for the league title which would only collapse on the very final day back at Ibrox. It was particularly heartbreaking for Bett, missing out on the one domestic medal he was ultimately never to get his hands on.

He continued in his now familiar number 8 shirt for another three seasons, but injuries were now taking their toll. Bett only managed around 30 games in his last two years at the club, and missed most of the 92-93 season as Aberdeen ran Rangers all the way in all three domestic trophies.

In the summer of 1994, Bett, along with Richardson, Paatelianen, Connor and McLeish, were sacrificed by manager Willie Miller for fresh faces, a move with the benefit of hindsight was to be the wrong decision as Aberdeen struggled at the wrong end of the table. Bett went on to play for Hearts and Dundee United for a spell, but it was to be the heartbeat of Aberdeen’s midfield that he will always be remembered, playing over 300 games in nine years.

It has generally been considered that the Gothenburg team were the best Dons side of all time, and Aberdeen fans have long discussed which other Dons player could have comfortably played in that team. Jim Bett’s name is one that crops up more than most. A wonderfully cultured midfielder, and one that fully deserves all the plaudits he receives for his time with Aberdeen.