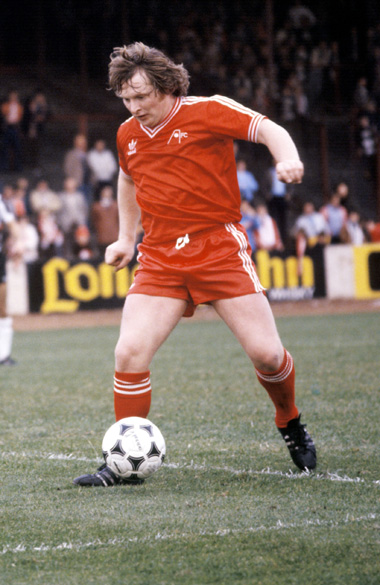 Aberdeen Mad regular SMsW looks at the club's record goalscorer, hero to many, and King of the Beach End - Joey Harper.

In October 1969 Aberdeen broke their transfer record when they paid £40,000 to Morton for their top scorer who had just completed a second successful spell at Cappielow. This was the start of the reign of King Joey Harper.

Eddie Turnbull had released 13 players from Pittodrie after the Dons finished 15th in the league the previous season & his re-building plans included Harper as his main striker.

Joe made his debut on 4th October in an away win at Ayr and followed this up with his home debut and inevitable winning goal in a 2-1 win v Partick seven days later.

He finished his debut season with 29 appearances and 15 goals including a cup final penalty when the Dons won their first major trophy in over a decade.

In his first spell with the Dons between 1969-1972 he scored a quite unbelievable 68 goals in 102 appearances including, in arguably his best-ever season, an incredible 42 competitive goals in 47 games in season 71-72 which won him the European ‘Bronze Boot’ award. He became only the second British player to reach the top three European scorers and was pipped by a certain Gerd Muller (a poor man’s Joe Harper).

In that season he pulled on the number nine shirt 60 times and his total in all competitions was 52. He netted a brace 6 times, a hat-trick once and even managed 4 in a win against Ayr Utd. He also famously scored 11 times in a nine-game scoring run.

His goalscoring didn’t go unnoticed though and in December 1972, after having scored 27 goals so far that season, Aberdeen sold Harper to Everton for £180,000 - a then record fee between two British clubs - and a Christmas was ruined for an 8-year-old loon!

His two-year spell on Merseyside didn’t really work out and even though he notched 12 goals in 43 games he was ready to return to Scottish football. A return to Pittodrie seemed on the cards but Hibs outbid them and Joe signed for the Easter Road club for £120,000.

His spell at Hibs, where he was never accepted by the fans, saw him play 69 times scoring 26 goals including a cup final hat-trick in a losing side.

Towards the end of season 75-76, which saw the Dons escape relegation by a whisker, the Red Army received the news that it longed for - ‘King Joey’ was coming home.

A £50,000 fee was completed after the March 31 registration deadline which meant that he could only turn out for reserve matches - which included 5,000 turning up to see him net four times in a 5-0 win against Celtic.

Joe’s second spell at Aberdeen was an unqualified success and he was top scorer for the next three seasons, with tallies of 28, 27 and 32.

An injury in a League Cup tie at Parkhead all but ended Joey’s playing career in the title-winning season 1979-80. Joey made his final appearance on the last day of 1980-81 season in a 2-0 win against Kilmarnock, bringing the curtain down on a truly remarkable career.

In his two spells with the Dons he scored 205 goals, making him our record goal scorer and unbelievably he was only ever capped four times for his country.