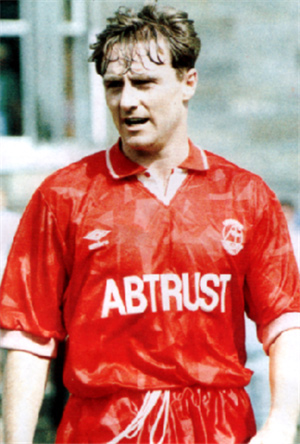 Back in 1983, Aberdeen were pretty solid all over the park - except for maybe right back.

The regular No2, Stuart Kennedy, had retired the previous season, and the right back slot was being filled at various times with Doug Rougvie, Neale Cooper and young Tommy McIntyre all having a shot in the position. Still, it came as a bit of surprise when Alex Ferguson signed McKimmie from Dundee in the winter of 83, as most observers thought that Aberdeen were looking at a deal for Dundee’s Iain Ferguson.

McKimmie didn’t have to wait long for his debut, going straight into the side for a routine home win over Hibs In the middle of December. Four days later and McKimmie lined up against the European Champions, SV Hamburg in the final of the Super Cup. For his first European game, the young full back had a fine game and looked already to have shown that the £90,000 Fergie paid to Dens Park was money well spent.

McKimmie quickly made the No2 shirt his own, settling into the Dons back four for the rest of the season. Come May and Aberdeen were on the verge of clinching the League Championship which they duly did with games to spare. A 1-0 win at Tynecastle at the beginning of the month was enough to lift the title and for McKimmie it was an even more special occasion, scoring not only his first Dons goal, but his first ever career goal. McKimmie’s and Aberdeen’s season finished on a high at Hampden, with the Dons retaining the Scottish Cup with a win over Celtic, again McKimmie playing his part.

For the next six years, McKimmie was a regular at the back for Aberdeen. Missing very few games,he was Mr Consistent, turning in 7 out of 10 performances week in, week out. It was during this time he got a well deserved call up to the Scotland squad, making his debut at Hampden against England in the Rous Cup. He would go onto earn 40 caps for his country, his highlight undoubtedly scoring the winner against then World Cup holders Argentina in a friendly at Hampden Park.

In the 1990-91 season, McKimmie was for the first time in and out of the side due to injury and the emergence of young full back Stephen Wright. By April, and with the Dons chasing Rangers for the league title, McKimmie was back in the side but at centre back, manager Alex Smith feeling it was unfair to drop Wright given the form he was showing.  McKimmie continued his good form in the middle, which included a bizarre game at Hearts were McKimmie scored an own goal after just two minutes, only for Stewart to minutes later score a cracker at the other end, the Dons ended up winning 4-2.

The season was to end in disappointment though, as Aberdeen failed on the final day at Ibrox to secure the draw they needed to win the League Championship for the first time in six years.

For the following season, McKimmie continued at centre back alongside Brian Irvine, but the hangover from the last game of the previous season continued. The Dons went out of the League Cup early, slipped down the league and made a disappointing exit from Europe at the hands of BK1903, the home leg remembered for McKimmie getting into an altercation with a home supporter. With manager Smith gone, and club legend Willie Miller now in charge, Aberdeen’s season limped to an uninspiring finish.

Willie Miller’s new squad, aided by some quality signings, lifted the club back to the top end of the league, but Stewart was to miss most of the season due to injury. With Irvine and McLeish back as the centre back partnership and Wright now a regular at right back, McKimmie showed his versatility by slotting in comfortably at left back for most of the 93-94 season. After two trophyless years, Miller shook things up by replacing most of the ‘older heads’ in the team.

Out went Bett, McLeish, Richardson and Connor and McKimmie was left as one of the most experienced members of the team. Not only that, Miller made McKimmie his new captain. After a deserved testimonial at the start of the season against Blackburn, McKimmie struggled with the new pressure, as did most of the team to be fair as they slid down the league.

Into 1995 and the Dons were staring relegation in the face for the first time and finally, just when all seemed lost, the Dons escaped with their lives and remained in the Premier League. For McKimmie, there was to be one more highlight in a Dons jersey, as the year drew to a close Aberdeen found themselves in the final of the League Cup and playing lower league opposition in the shape of Dundee. The Dons comfortably won the cup 2-0, and McKimmie lifted his first trophy as captain. All those years later, and Stewart is still the last skipper to lift a cup for the Dons.

Poor performances on the park and poor management off the park saw that McKimmie’s time at Pittodrie was coming to an end. His last game in a Dons shirt came in an embarrassing 4-0 defeat at Tannadice on New Years Day in 1997, before making the short journey down to Dundee to sign for United.

In 14 years he won nine major trophies. He did, in the latter years, lose the respect of a large section of Dons support, and since his move into writing about the Dons in the Evening Express he’s lost more fans' backing with his often controversial opinions about the team.

That aside, McKimmie had a major task coming into the Aberdeen team in 1983. That was to make Dons fans forget about Stuart Kennedy, arguably the best right back Aberdeen ever had. I reckon he did not a bad job at all. At the end of his time at Pittodrie, he’s behind only Miller, McLeish and Bobby Clark for appearances in a Dons shirt.

Stewart McKimmie legend? I think so. As a player anyway!