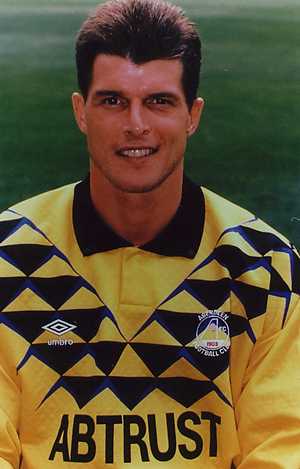 BobbyBiscuit casts his eye over the Pittodrie career of a legendary Dutch giant.

In 1988, on my ninth birthday (Friday the 13th, no less), I picked up the paper to read the devastating news. Jim Leighton, the Aberdeen and Scotland No1 - and easily one of the best goalkeepers in the world at that time - had signed for Manchester United to join up with his old Aberdeen boss, Alex Ferguson.

I am sure it wasn't just nine-year-old boys who were crying into their Weetabix that morning. I was worried, how could we ever replace Leighton - the most agile, instinctive and brave goalkeeper I have ever seen to this day?

When taking Leighton south to Manchester, Sir Alex left Aberdeen's new managers with one word of advice, check out the goalkeeper for Dutch side FC Twente Enschede, Theo Snelders. Thankfully, Alex Smith and Jocky Scott did just that, and the giant Dutchman (a kind of taller version of Tom Cruise) was in place for the new season after the Dons paid the modest sum of £300,000 for his services.

The first thing noticeable about Theo was his physique, at 6'2" he wasn't that much taller than Leighton, but he was built like a cruiserweight boxer. The next thing noticeable when I first saw him at his debut at Dens Park was his warm up - and not just because he was wearing a wet suit.

The rigours of his warm up would have most outfield players gasping for breath and he was the first goalkeeper in this country to go through such a comprehensive warm up. Even now, when training methods are supposed to be better than 15-20 years ago, I've still to see a keeper put in the sort of shift Theo did before each game.

But, of course, the real test would come in the match itself. A massive Aberdeen support were there to see if the Dutchman could replace the irreplaceable. And after just a short time, this guy looked to have astonishing ability. One moment in particular, a thumping shot from outside the area was going over his head, diving back to the point of almost being horizontal, he punched it over the bar. For the first of a million times, the Red Army in unison chanted "THEO! THEO! THEO!" There wasn't one person who left that stadium in any doubt that Snelders was going to be a major player for Aberdeen FC.

He continued in such fashion, and was fast becoming a hero to all and the memory of Gothenburg hero Jim Leighton was, incredibly, fading fast. With the exception of one error in the League Cup Final (which could actually be apportioned to a unusually poor David Robertson throw-in anyway), Snelders had a near-perfect season winning player of the year at the same time.

The next season would prove to be more fruitful, playing a massive part in winning the Cup Double. Outstanding against Rangers in the League Cup Final, he inspired his team to a 2-1 victory, and produced a magnificent one-handed penalty save to win us the Scottish Cup against Celtic. The 1990-91 season could perhaps be described as pivotal in the fortunes of Aberdeen Football Club, and the role of Theo Snelders was definately at the centre of it. With the Dons hot on the heels of the Ugly XI of Govan, a massive game at Pittodrie between the two could have had a huge say in where the title would end up.

After torrential rain, the referee decided in his infinate wisdom that the game was going ahead... clearly not wanting to disappoint all his brothers in the Beach End. The conditions were nothing short of farcical, and the inevitable happened when 'Nice Guy' Ally McCoist smashed Snelders cheekbone into a hundred pieces. He was going to miss a large part of the season. Points were dropped when victory should have been assured, and although the team went on a fantastic run, Theo was going to miss the last chunk of games with injury again, meaning youngster Michael Watt would face Rangers in the final day showdown.

It is too easy to say that had Theo not had his injury, we'd have been League Champions. But he was such a massive part of the team, in particular since Willie Miller had now retired, that it is hard to see where else the League Title would have gone other than Pittodrie. In retrospect it was probably - apart from a couple of good years - the start of the slippery slope, the side never really seemed to fully recover from the devastation of that final day.

In the years to come, Theo was still a rock at the back for the Dons, but after the injuries - both cheekbone and shoulder injuries - he never seemed to have quite the same confidence, but he was still an outstanding goalkeeper, once again heading to the World Cup with Holland in 1994.

Roy Aitken later dropped him in favour of Watt and then did the unthinkable and sold him to Rangers, comically as back up to Andy Goram. Although he clearly wasnt the same keeper as he had been in years gone past, it was a very sad day to see a real hero of the Aberdeen support turn to the dark side.

The one bright note in the ugly end to a beautiful friendship between AFC and Theo, was when asked for the Rangers match day programme what one thing he would he like to experience in football, Theo replied with: "To have the chance again to run out at a packed Pittodrie in an Aberdeen strip, and hearing the Dons fans chant my name". Enough said. Snelders is a legend.