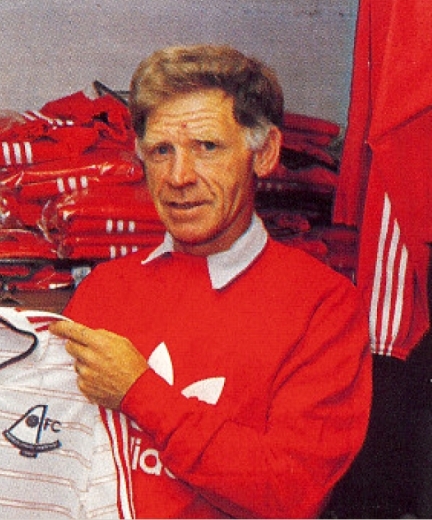 A book of condolence from Aberdeen supporters for Teddy Scott, 1929-2012.

An Aberdeen legend through and through.
embrared

A true gent and legend.
KeglerSuper

Literally the heart and soul of the club. Players/managers came and went but teddy remained.
05car

If we ever get round to a new stadium,here's hoping the museum is named after him.
CalumGilhooly

Very sad news indeed, will always hold a special place in the hearts and minds of every Dons fan out there.
sword_of_truth

We will never ever see his like again.
Dobsred

The last remaining link of a great Aberdeen side.
scottishsweeney

One of the major reasons for the success story that was Aberdeen Football Club. His tireless work on behalf of the club we love will never be forgotten.
Spectrum

Despite the heroes on the pitch, or in the dugout in the early 80s, Teddy was Mr Aberdeen. So much to thank him for, not least the suggestion that a young striker from Glasgow might want to try his hand playing at centre back. Willie never looked back.
eesh

An absolutely lovely man. Will be missed by everyone.
onlyjim

"Aberdeen have what money can't buy: a soul, a team spirit built in the family tradition." Teddy exemplified the soul of the club and was a massive part of building that tradition. He'll be missed.
glove87

Had the pleasure to meet Teddy about 15 years ago (maybe even longer) on a tour of Pittodrie, his football knowledge was second to none and his passion for AFC was amazing.
Big_Ecks_Right_Peg

He will be forever remembered for his undying love for the club and his contribution to AFC for so long. This will break many people's hearts, non more so that SAF.
DonVincenzo

This news is so, so sad. One of my favourite words when I was young was "tumma dryer" (tumble dryer) from all the times I'd help Teddy with the washing when my dad trained.
Leon_Mike (Neil Simpson's son)

Teddy's room was my favourite in Pittodrie, full of memorabilia, ties and international tops from the many players that looked up to him. His collection of Green Finals was tremendous.
steenhive

Teddy Scott eptomised everything that is good about our great club. The word legend is banded around far too often nowadays but this man was a true legend and a true gent to match.
the_fester_afc

From the way everyone speaks of Teddy and the job he did at AFC, no one deserved to share in our success through the years more than he.
jimmysriddle

An absolute gentleman who lived and breathed Aberdeen football club. Pretty sure my old man will have pulled his arm at the pearly gates to sit and natter with him about all things AFC.
awafaehame

Loved the Dons, but more than that loved football. Happy to watch football of any description, from a kids game on the street, to Sunday League at the Gordon Park and on to the Dons at their best.
Aged_Pred

He epitomised everything that was good about the club. Dignified and modest but always a perfectionist. A sad day indeed. Let's make sure in some shape or form that his name is never forgotten.
deedon

A man that gave so many years of excellent service to Aberdeen FC. He even slept on the snooker table if he had stayed late at Pittodrie. Though I never had the pleasure of meeting him, I've read many former players' autobiographies and not one of them had a bad word to say about him. Many of our players owe their success to Teddy Scott. In fact, I believe Arthur Graham tried to give him his Scottish Cup medal in 1970, but Teddy refused it.
swaddon

If everyone at Aberdeen Football Club had the same passion and commitment as Teddy Scott did we'd be the best football club in the world.
kittybrew

Teddy was loved and respected by everyone who had the privilege to meet him and i count myself lucky to be one of those. What a great servant and ambassador he has been over all the years to our great club.
MerklandMan

Remember meeting Teddy on a tour of the Fortress when I was a lad. He was a gem, chuffed to talk to anyone and everyone on the tour group about his time at the reds, wish I was a bit more up on his importance by the then, as I'd have probably met him with the same stare that some of the first teamers got when I bumped in to them.
Zeros_Afro11

Always remember Teddy giving me a tour of Pittodrie in'81 and seeing his little room full of all the pendants of all the teams we played in Europe and friendlies. Magic stuff!
stuart_kennedy_tache

Teddy Scott was like the wise old grandfather of the family keeping the players grounded.
yaujta

Only ever briefly met the man on tours etc of Pittodrie. Always took the time to stop what he was doing and chat about all things AFC.
wearereds

I have just hung up my 1983 Aberdeen scarf and a bouquet of flowers outside the main enterence of Pittodrie (pictured). Never done anything like that before. RIP Teddy.
Theredpimpernel

Met him once when i was at the youngstars open day. Pity i didn't really know of his importance and status to older fans at the time. Gone but never forgotten.
jreidafc666

Met him when I got an "unofficial" tour with my father and Alex McLeish back in the early 80's, I was only about 14 at the time however remember him being really cool with us just appearing, took us round the place for a look around then gave me a signed programme from that year.
soup73

The world is a poorer place now without Teddy Scott.
TheAngusBull

His family should be immensely proud of a man who thousands and thousands fans will always hold close to their hearts.
Gillhaus69

An unsurpassed servant of the club and a true Aberdeen legend.
Don_Perignon

Dignified. This word sums up Teddy Scott for me.
LanarkRed

Thank you so much for the contribution you made to Aberdeen Football Club for almost 50 years of your life.
Redrebel

An integral part of our most successful period as a club along with the likes of Dick Donald, Chris Anderson and one Alexander Ferguson.
MeadowbankRed

Had the pleasure of meeting Teddy on several occasions, most memorably on ballboy duty. At a time when our team was full of superstars, I remember being awestruck in the great mans presence.
milne_afc

3 tours as a youngster - Teddy's room being easily the highlight of each. Met him on a few occasions too when playing at Pittodrie. Fit a dons' man if e'r there wis.
RicoS321

I had the pleasure of Teddy bandaging a damaged finger in the physio's room when training at Pittodrie in the late 70s. Toff of a guy.
phuxachemin

The best tribute of all would be for us as supporters to put as much love and dedication into the Club, pro rata, as Teddy Scott did. Fan will we iver see his likes again? Salut Teddy!
phoenixx

Not all of us on here met him, but we all knew him. With Aberdeen in his heart he was one of us.
Rest in peace Teddy and thank you for your incredible service.
A truly sad day.
Krazy_Ivan