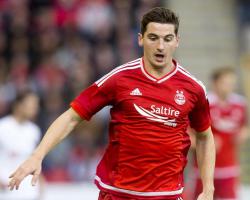 Kenny McLean scored his third goal of the season as Aberdeen began their Ladbrokes Premiership campaign with a 1-0 win over Dundee United.

Fresh from giving his side a Europa League lifeline with an away goal in Kazakhstan, the former St Mirren midfielder looped a backward header in off the bar in the 83rd minute at Tannadice.

Aberdeen's victory was all the more impressive for the fact they travelled 7,000 miles in midweek on Europa League duty, exertions which seemed to play a part in their slow start to last season.

Three of them are now at Celtic while Ryan Dow is missing with a hamstring injury.

McInnes had called for the Dons players and fans to make the occasion feel like a season opener following last year's damp squib and a 3,500-strong travelling support obliged.

There was no instant take-off on the pitch though, with the game only getting stretched in a frantic final 30 minutes

United had three debutants in the heart of their defence, Zwick behind Coll Donaldson and Mark Durnan, but Aberdeen could not get enough early balls in the box to test them.

Ward stood up well to block the United striker's shot with his chest.

The second half started slowly but livened up after the hour mark, after Jonny Hayes played a one-two with McLean but shot wide of the near post when a ball across the goal would have been more dangerous.

United brought on three new players - Simon Murray, Darko Bodul and Rodney Sneijder - but it was another defender, Donaldson, who threatened again when he headed over.

The next Aberdeen chance also fell to a defender, Andrew Considine, after Zwick dropped a cross at his feet 14 yards out - but the goalmouth was crowded and Ryan McGowan cleared his measured strike off the line.

But Zwick was soon beaten by McLean and the visitors killed the game.