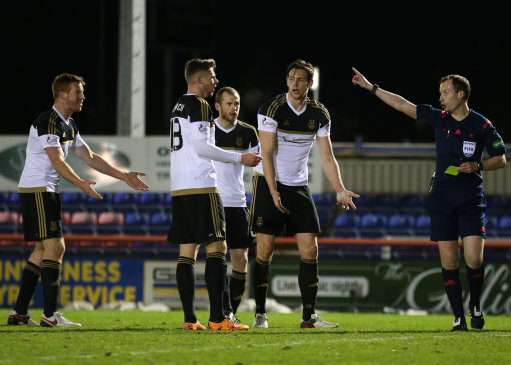 Aberdeen missed the chance to go level with Celtic at the top of the league as bogey team Inverness Caledonian Thistle completed a home double against the Dons this season.

Inverness, aided by 'referee' Willie Collum and blundering Dons defender Ashton Taylor, came from behind to win 3-1 and put a dent in the visitors' title bid.

The farce began before kick-off, when it was discovered that the officials hadn't checked the nets properly, with Scott Brown's requiring several minutes' repair.

Aberdeen started well and led through Rooney's 19th goal of the season after just seven minutes, the striker converting after a fine solo run from Craig Storie.

And the Dons were looking completely in control when Taylor stumbled on the ball and gifted Vigurs an equaliser for Inverness against the run of play, midway through the first half.

That goal deflated the Dons players, and in the second half an atrocious decision from Collum presented the Highlanders with a penalty when Taylor was adjudged to have used a high boot on Ross Draper inside the box.

Draper's foot was at least as high as Taylor's, and no contact was made as Draper disgracefully collapsed to the ground, but Collum bewilderingly pointed to the spot allowing Aberdeen's January target Tansey to score from the spot.

Victory was assured for the hosts after 65 minutes when the hapless Taylor flicked a right-wing cross right onto the head of Tremarco at the back post, the goal being awarded after some deliberation between Collum and his assistant.

The either-incompetent-or-biased-or-both referee hadn't finished there though, denying the Dons two stonewall penalties which could have scraped a probably undeserved point for the Reds.