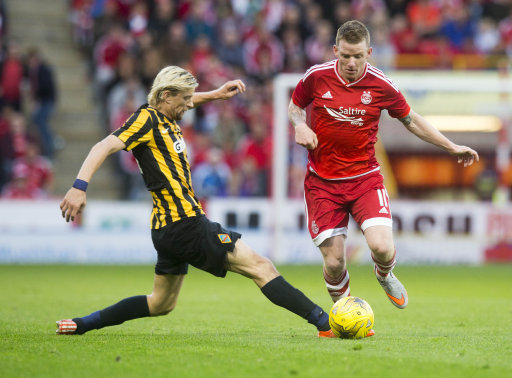 Jonny Hayes struck a late equaliser to grab a deserved 1-1 draw for Aberdeen against NK Maribor in the Europa League third qualifying round first-leg tie at Pittodrie on Thursday.

The Dons missed a glut of chances before being stunned by an 83rd-minute breakaway goal from Milivoje Novakovic, which gave the visitors the lead.

Hayes slotted home from 10 yards on 85 minutes, after good hold-up play from Adam Rooney, but Aberdeen have a tough ask to secure victory in Slovenia next week.

Maribor have knocked Hibernian, Rangers and Celtic out of European competition in the past six years - not losing any of the six legs - and reached the Champions League group stages courtesy of their victory over Ronny Deila's side in 2014.

They will remain favourites to make it a fourth Scottish scalp following their away goal but they faced an early onslaught in front of 17,105 fans at Pittodrie, when Rooney, Jayden Stockley and Niall McGinn all came close inside the first three minutes.

Rooney was presented with a glorious chance when a Maribor pass ricocheted into his path 18 yards out, but goalkeeper Jasmin Handanovic got enough of his body in the way to stop the shot going in.

The pressure continued but Maribor missed the best chance of the half when Marwan Kabha blazed over from eight yards after Marko Suler got round the outside of Rooney and cut the ball back.

Aberdeen were soon back on the attack. McGinn had a free-kick saved before Rooney was denied by Handanovic after Stockley's knockdown. The Irishman was then inches away from connecting with Andrew Considine's cross with a diving header.

The former Bournemouth striker header over from McGinn's delivery seconds later and the Northern Ireland man drove a cross just wide of the far post before the half-time whistle, which was doubtless music to the ears of the Slovenians.

Joe Lewis made two comfortable saves before Aberdeen kick-started their second half 12 minutes in as Stockley forced a decent stop following Rooney's cross.

Hayes arrowed a 22-yard strike just beyond the far post and the hosts kept the pressure on without carving out the clear chances of the first half.

They thought they were ahead in the 80th minute when Rooney slotted home from McGinn's through ball but he was flagged offside.

But they soon fell behind when Novakovic shrugged off Ash Taylor to run on to a through ball and fire home from 16 yards.

Defeat would have been a severe injustice for the Dons and Hayes showed composure to continue Aberdeen's run of late goals, the Dons having downed previous opponents Fola Esch and Ventspils in the closing stages.