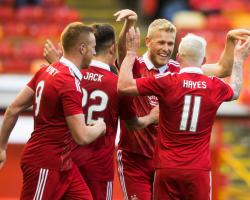 Super-subs Jayden Stockley and Wes Burns both came off the bench to fire Aberdeen to a 3-0 victory against Ventspils at Pittodrie.

Summer signing Stockley opened the scoring only six minutes after introduction during the second half of the Europa League second qualifying round, first leg tie.

Adam Rooney then fired in a second goal for Aberdeen and debutant Burns got on the scoresheet late on to give the Reds a healthy lead to take to Latvia for next Thursday's return contest.

The first opportunity of the game fell to the Dons when Kenny McLean flicked a header wide from six yards out following a cross by Jonny Hayes.

Ventspils' best chance of the entire match arrived in the 25th minute after they won a corner, which was played by Aleksei Alekseev to Alans Sinelnikovs

The left midfielder's delivery carried past the far post to Nikita Kolesovs, but the defender could only turn his effort wide.

Aberdeen ramped up the pressure after the half-hour mark and finished the opening period on the front foot.

A cut-back from Hayes found the onrushing Rooney, but from 10 yards out, the striker sent his effort wide.

The ball looked as if it would fall to McLean, only for defender Antons Jemelins to clear the danger.

Early in the second period, Niall McGinn was gifted a good shooting opportunity with a free-kick 20 yards from goal

Uvarenko was up to the task of making the save though, as he dived low to his left-hand side to get a hand to the ball.

Stockley was summoned from the bench in the 66th minute to replace McLean and the substitute quickly made a huge impact by breaking the deadlock.

Only six minutes after his introduction the powerful striker got on the end of a cross from the left wing by Hayes to nod the ball past Uvarenko.

It did not take long for the Dons to double their advantage, as Ventspils failed to clear the ball from their penalty area following a cross by Ryan Jack and Rooney dispatched a low shot into the net from 12 yards out.

Burns completed his loan move from Bristol City to Aberdeen on the day of the game and the 21-year-old enjoyed a dream debut after coming on as a substitute late on, as he sent a header past Uvarenko in the first minute of additional time at the end of the game.