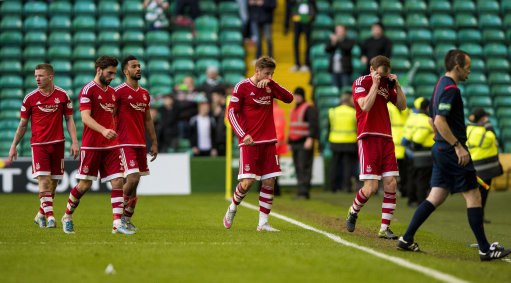 Aberdeen lost 1-0 away to Slovenian side Maribor to go down 2-1 on aggregate in their third qualifying round clash.

The winning goal came in farcical fashion in the fourth minute of stoppage-time after an attempted back pass from Graeme Shinnie bobbled over goalkeeper Joe Lewis' foot and into the net.

Requiring a goal of their own to advance in the competition, the Dons were already heading for the exit door prior to that calamity.

Aberdeen striker Adam Rooney wasted the opportunity to put his side ahead in the tie when, with the score 0-0 on the night, he had a penalty saved by Jasmin Handanovic.

The Maribor goalkeeper escaped being sent off, despite his violent foul on last man Rooney, with the referee blowing for a penalty seemingly after Niall McGinn had scored when the loose ball ran into his path.

Derek McInnes' side spend most of the second half with 10 men after substitute Jayden Stockley was dismissed for the second of two highly dubious yellow cards in the space of six minutes.

Jonny Hayes had scored a last-gasp equaliser at Pittodrie last week but missed the trip to Slovenia after picking up a hamstring injury, while a minute's silence was held in memory of two players from the home side's youth team who died in a car crash earlier this week.

The opening exchanges were largely uneventful when the action got underway until the visitors were awarded a penalty,.

A charitable explanation for what happened would be that the referee got confused about FIFA's recently revised rules on last-man fouls.

Despite committing a violent, studs-up attack on Rooney's Achilles, Maribor goalkeeper Handanovic bewilderingly remained on the pitch with just a yellow card.

Rooney picked himself up only to fire a weak penalty down the middle of the goal and Handanovic got a trailing leg to the ball to keep it out – Rooney's first ever missed penalty for Aberdeen.

Aberdeen looked to regroup but failed to create much in the way of goalscoring chances, with Wes Brown's 25-yard strike easily stopped by the home 'keeper.

Shinnie was also lucky not to see red after he went in two-footed on midfielder Blaz Vrhovec as the sides went in level at the break.

Maribor came out the stronger at the start of the second period, with Dons keeper Lewis doing well to stop Milivoja Novakovic's shot on the turn from the edge of the box.

Stockley's bizarre dismissal left the Dons light for the final 29 minutes, although Marcos Tavares was unable to add to their woes as the Brazilian failed to convert a loose ball at the back post.

Shinnie's own goal capped a hugely frustrating night for McInnes and his players, who must now focus their attentions on their Scottish Premiership opener against St Johnstone on Sunday.